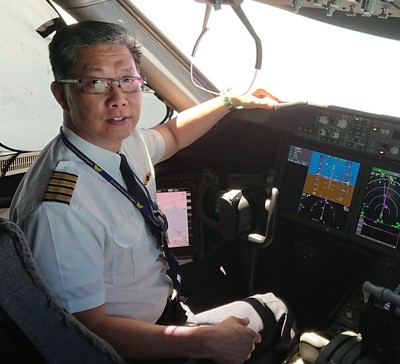 Capt. Jeffery Ang, a commercial airline pilot, started his flying career at the age of 19 with the Republic of Singapore Air Force. As a military pilot on the C130 Hercules aircraft, he had flown and participated in numerous Humanitarian Assistance and Disaster Relief Operations, United Nations Peacekeeping Missions, and Air Defense Exercises both locally in Singapore and overseas.

After 12 years of military flying, he joined SIA in 1999, attained his commandership on the Boeing 777 wide body airliner in May 2007, and flew that aircraft until Sept 2018. Currently, he is an aircraft commander on the Boeing 787-10, commonly known as the “Dreamliner”.

With more than 3 decades of flying, he has acquired experiences as a Line Instructor Pilot on the B777, a Supervisory Captain (Instructor) on the B787, a Peer Supporter of the Pilot’s Advisory Group (PAG), and as Branch Chairman of the Air Line Pilots Association of Singapore (ALPA-S).

Academically, he holds the Bachelor of Aviation Management from Massey University and attended the Counselling Skills and Practice (Introductory) with the Social Service Institute. Additionally, he is also an Industry Mentor to students from Ngee Ann Polytechnic and undergraduates from Nanyang Technological University.