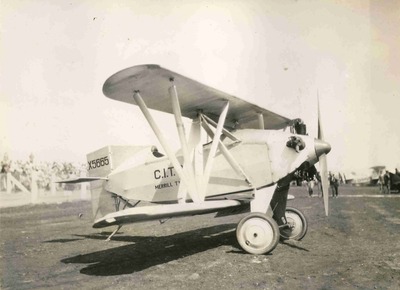 One of the most unusual looking airplanes at the National Air Races was developed by Professor Merrill of the University of California. It had and exceptionally short fuselage with horizontal stabilizer but no elevators. A control was devised to change the angle of the main wing to permit climbing and diving.

It was a decidedly queer looking affair in the air and had a high rate of climb and was fairly stable in the air. It had rather poor characteristics for landing because of its short length and leaped around as lively as a porpoise. The announcers on the field refered to it as the Doodle Bug.