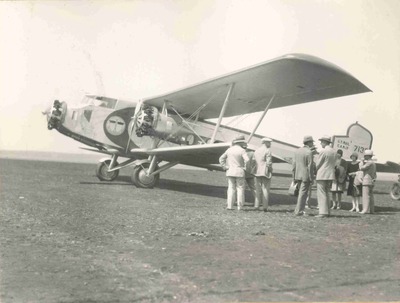 The largest ship on the field was the huge Boeing transport. This was a trimotored biplane of exceptional lifting power. It was powered by three Wright Cyclones and accommodated 15 passengers. Eric Nelson, one of the famous group of Army round-the world flyers is Sales Manager of Boeing. We became acquainted and V.M. and I were invited with a small group to take a flight down towards Long Beach. Need I say more than that we accepted with pleasure. Eric himself was at the controls when we took off for the flight while the party lolled at ease in the luxurious seats with which the plane was fitted.