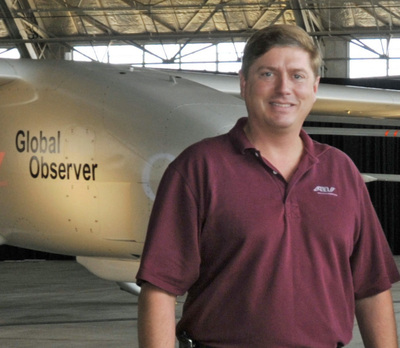 Andy is a Distinguished Graduate of the USAF Test Pilot School as well as the Air Force Institute of Technology. He has held several positions as a test pilot including Chief of Test and Evaluation in the F-22 Program Office and instructor at the Test Pilot School. His career in the Air Force culminated as Commander of the 452d Flight Test Squadron and Director of the Global Vigilance Combined Test Force, the group responsible for the flight test of the nation’s newest unmanned aircraft.

At AeroVironment, Mr. Thurling has been responsible for all phases of testing on AeroVironment’s revolutionary hydrogen-powered unmanned aircraft, the Global Observer, from strategic test concept development to acting as initial cadre instructor pilot. He was awarded the 2011 AUVSI Foundation “Operations Award” for this work.

Andy is currently leading airworthiness, certification, and airspace access strategic efforts for AeroVironment. He is actively involved in shaping the domestic and international regulatory environment as a member of RTCA SC-228, several ASTM working groups, and as the Vice-Chairman of EUROCAE WG-93.