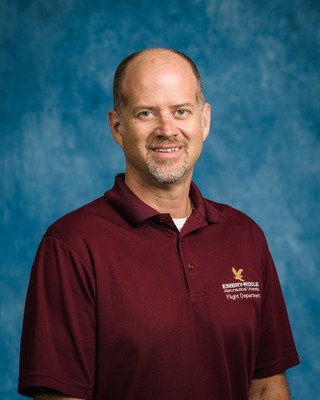 Bob joined the ERAU Flight Department in January of 2014 as the Flight Department Quality Assurance (QA) Manager and assumed the position of Director of Aviation Safety in late 2018. Bob oversees the administration of a robust safety management system (SMS) which is founded on the belief that a vibrant Safety Culture is the key to accident prevention.

ERAU Leadership is committed to developing, implementing, maintaining, and constantly improving strategies and processes to ensure that all its aviation activities take place under the highest levels of safety oversight.

Bob has been a flight instructor and corporate pilot in the central Florida area for close two decades. Prior to his arrival at ERAU he worked for a large flight academy where held the titles of Director of Flight Standards and Safety and Director of Flight Operations. Bob attended the University of North Dakota and is also a former Olympic and professional hockey player and now shares his passion for hockey as the head coach of the ERAU Eagles ACHA hockey team.