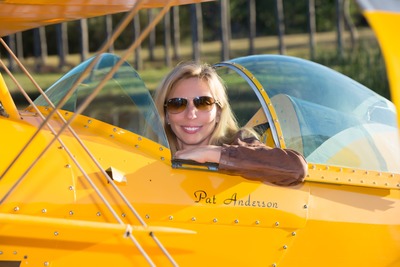 Dr. Carolina Anderson was born in Bogota, Colombia, and was introduced to aviation at an early age by her Dad who flew for Avianca, the main Colombian airline; she started flying gliders at age 14 and soloed at 16, towed by her dad in a Super Cub. Later on, she earned her private pilot certificate while she was attending school pursuing a mechanical engineering degree so that she could understand better how airplanes work.

Dr. Anderson is an Associate Professor of Aeronautical Science in the College of Aviation at ERAU. Dr. Anderson holds a Ph.D. in Aviation from Embry-Riddle Aeronautical University (ERAU), she graduated with the first group of Ph.D. graduates at ERAU in December of 2013, and became the first woman with a Ph.D. in Aviation. Dr. Anderson also holds a Master in Business Administration in Aviation from ERAU, and a B.S. in Mechanical Engineering from Los Andes University in Bogota, Colombia. In addition, Dr. Anderson holds an ATP and Commercial Pilot certificates in single engine, multi-engine, instrument airplanes, gliders and seaplanes; CFI in gliders, Instrument, single and multi-engine airplanes; Check Pilot and Training Center Evaluator. Dr. Anderson has over 4,500 hours of flight time, and over 3,500 hours of flight instruction given. Dr. Anderson began her career at ERAU in the fall of 2000, as a flight instructor for the flight department. In her 11-year tenure with the flight department at ERAU she performed the duties of Flight Instructor, Team Safety Leader, Flight Standards Check Pilot, and Training Manager; approved to teach and perform check-rides in all airplanes and courses. In 2011, she joined the faculty of the Aeronautical Science Department. Dr. Anderson has participated in numerous research projects and publications in the areas of Unmanned Aerial Vehicles (UAVs), alternative fuels, flight testing and simulation, upset recovery training, aircraft certification, aviation safety, STEM education, and text mining and statistical analysis.

Dr. Anderson is a member of the AOPA High School Steering committee, she participated in the 14 CFR Part 23 Aircraft Certification Aviation Rulemaking Committee (ARC) and was appointed Chair of the Industry Liaison Subcommittee of the ASTM F-44 GA aircraft certification chapter. Dr. Anderson is very passionate about promoting aviation, aerospace and STEM education among young students; she spends most of her free time volunteering for recreational aviation organizations. She is the vice president of an IAC (International Aerobatic Club) chapter that is part of EAA; she is the faculty advisor of the Sport Aviation Club at ERAU, and President of the Daytona Chapter of the 99’s. Dr. Anderson has also been in charge of the Girls Exploring Math and Science camp at ERAU, she has been the coach for the Women Air Race Classic team for ERAU, a mentor for Women Soar at EAA Airventure, and the vice president of the Eagle Sport Aviation Club. Dr. Anderson and her husband (who is an engineering professor at ERAU) have created several “junior programs” around the country that specialize in teaching high school students to fly in gliders, LSA, and tailwheel airplanes. Dr. Anderson also has over 20 years of experience in General Aviation in the U.S. and internationally as an aircraft owner, operator, flight instructor and volunteer of many General Aviation Organizations.