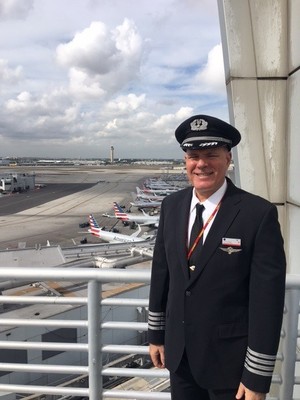 I received a Bachelor of Science in Aerospace Engineering from the University of Texas in 1986. I was commissioned a Second Lieutenant in the United States Marine Corps after completing the Platoon Leader’s Class, Officer Candidate School in Quantico, VA in December, 1986. I was awarded my Naval Aviator Wings of Gold in 1989 at NAS Corpus Christi, TX, where I was a distinguished graduate. I flew KC-130’s in VMGR-152 based at MCAS Futenma, Okinawa from 1990 to 1993. I then served as an instructor pilot in VMGRT-253 on KC-130F models. I graduated from the USAF Test Pilot School, Edwards AFB, in 1995 with Class 94B and was the winner of the Onizuka Leadership Award. I then served as a test pilot and project officer at Naval Air Station Patuxent River, MD until I left active duty in 1998. While at Pax River, I graduated with a Master of Science in Aviation Science from the University of Tennessee in 1996. Following my time in the Marine Corps, I became an airline pilot with American Airlines in 1998 and was fortunate to be based near my home at our Miami base. I have flown the Boeing 727, 757, 767, 777, and the A320 family of aircraft. I am currently a Check Airman Captain on the A320. My duties include instructing/evaluating initial and transitioning pilots to line flying on the A320. I have had several safety related collateral duties at American Airlines. I have served on both the Miami Base and National Allied Pilots Association Safety Committees. As a member of our safety team, I have participated as a Line Operations Safety Audit (LOSA) observer and contributed to our Aviation Safety Action Program (ASAP). I am a Doctoral Student at Embry-Riddle University College of Aviation.

It has been during my experiences while instructing on the A320 that I became intrigued by the flight control designs unique to the A320. My research interests are associated with the effects of flight deck design, automation, and aeronautical decision making on Crew Resource Management, particularly Pilot Monitoring responsibilities and barriers. I am specifically interested in issues in Pilot Monitoring in side-stick controller design, particularly with the comparison of passive, versus active, side-stick design.

My wife, Bettina, and I have two daughters, Natalie, 25, and Sofia, 13. We live in Weston, FL. My hobbies include the gym, cycling, photography, hiking, and reading.