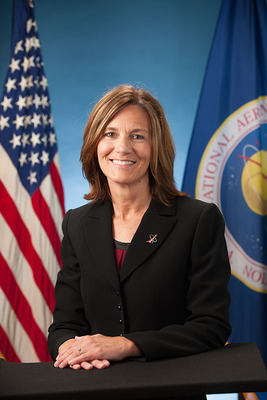 Lisa M. Colloredo is the associate manager of the Commercial Crew Program (CCP) at NASA's Kennedy Space Center in Florida. CCP is leading NASA's efforts to develop the next United States capability for crew transportation and rescue services to and from the International Space Station (ISS) and other low-Earth orbit destinations. The outcome of this capability is expected to stimulate and expand the U.S. space transportation industry.

Since June 2012, Colloredo has taken on the role of associate manager to assist CCP's program manager in the budgeting, contracting, safety and technical areas of the program at Kennedy.

Colloredo began her aerospace career with Lockheed Space Operations Corp. as an orbiter structures engineer and ground systems project engineer at Kennedy in 1987.

Her NASA career began in 1991 and has spanned various organizations, including the Safety and Mission Assurance Directorate, the Shuttle Processing Directorate's Business Office, the Launch Vehicle Processing Directorate's Project Control Office, and the Constellation Space Transportation Office. During her more than 20 years with America's space program, she has supported several institutional organizations, projects and programs.

Colloredo has been honored with many NASA awards, most notably the Outstanding Leadership Medal for leadership contributions to centerwide change initiatives, an Exceptional Service Medal, and a NASA Silver Snoopy for outstanding support to the Space Shuttle Program as a technical resources manager.

Colloredo was raised in Wheeling, W.V., received a Bachelor of Science in mechanical engineering from the University of Dayton in Ohio and a Master in Business Administration from the Florida Institute of Technology in Melbourne.