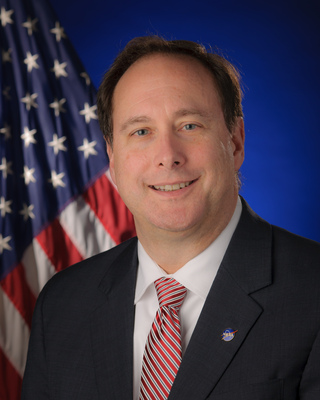 Robert Lightfoot is NASA’s Acting Administrator, a role he added January 20 in addition to his permanent position for the last five years as NASA’s Associate Administrator, the agency's highest-ranking civil servant position.

Lightfoot actually is a rocket scientist. He began his NASA career 28 years ago as a space shuttle main engine test engineer at Marshall Space Flight Center in 1989. He spent his early career in testing and propulsion at Marshall and later at Stennis Space Center. Following the loss of Columbia, he spent two years at NASA Headquarters for return to flight activities and initial transition and retirement efforts for space shuttle infrastructure.

He then returned to Marshall where he spent the next seven years in various leadership roles culminating as director of one of NASA's largest field centers, which plays a critical role in NASA’s space operations, exploration and science missions.

Lightfoot began his aerospace journey with a mechanical engineering degree from the University of Alabama, where he later served on the Mechanical Engineering Advisory Board. He also is a Hall of Famer, having been inducted into the State of Alabama Engineering Hall of Fame.

Among the numerous awards for his work, he has been recognized three times with the Presidential Rank Award for Distinguished Executives – the highest honor attainable for federal government work. He has also received the Silver Snoopy award given personally by the astronaut office to those who have enhanced flight safety and mission success.