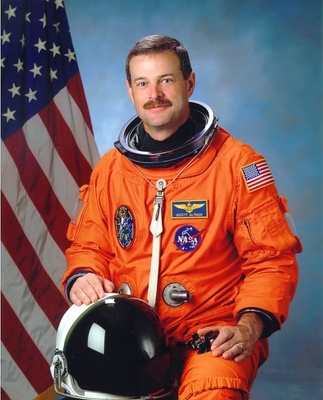 EXPERIENCE: Commissioned as an Ensign in the United States Navy in August 1981, received his Navy wings of gold in February 1983. Based at NAS Miramar, Altman completed two cruises flying the F-14A Tomcat. In August 1987, he was selected for the Navy Test Pilot School and graduated with Test Pilot School Class 97 in June 1990. Deploying in 1992 withVF-31 and the new F-14D, he was awarded the Navy Air Medal for his role as a strike leader flying over Southern Iraq. Following return from this deployment, he was selected for the astronaut program. He has logged over 7000 flight hours in more than 40 types of aircraft.

NASA EXPERIENCE: Altman reported to the Johnson Space Center in March 1995 as an astronaut candidate. He was the pilot on STS-90 (1998) and STS-106 (2000), and the mission commander on STS-109 (2002) and STS-125 (2009). Following two years as Shuttle Branch Chief for the Astronaut Office and lead for the Cockpit Avionics Upgrade, in 2005 he was assigned on temporary duty to NASA Headquarters as Deputy Director, Requirements Division of the Exploration Systems Mission Directorate. On returning to Houston, and following STS-125, he served as the Chief of the Exploration Branch of the Astronaut Office. A veteran of four space flights, Altman has logged over 51 days in space.

SPACE FLIGHT EXPERIENCE: STS-90 Neurolab (April 17 to May 3, 1998). During the 16-day Spacelab flight the seven person crew aboard Space Shuttle Columbia served as both experiment subjects and operators for 26 individual life science experiments focusing on the effects of microgravity on the brain and nervous system.

STS-106 Atlantis (September 8-20, 2000). During the 12-day mission, the crew succssfully prepared the International Space Station for the arrival of the first permanent crew.

STS-125 Atlantis (May 11-24, 2009) was the fifth and final Hubble servicing mission. The 19 year old telescope spent seven days in the Shuttle’s cargo bay undergoing an overhaul conducted over five back to back spacewalks. The crew overcame frozen bolts, stripped screws, and stuck handrails to complete all mission objectives. The STS-125 mission traveled over 5.3 million miles in 197 Earth orbits, and ended with a day landing at Edwards AFB following two days of wave offs due to poor weather in Florida.

POST NASA EXPERIENCE Altman left NASA in September 2010 to join ASRC Federal Holding Company (AFHC) in Greenbelt, Maryland as Vice President for Strategic Planning of ASRC Federal Research and Technology Solutions (ARTS). AFHC is a wholly owned subsidiary of Arctic Slope Regional Corporation (ASRC), one of 13 native‐owned regional corporations established in Alaska as a result of the Alaska Native Claims Settlement Act (ANCSA).In August 2012 he became Vice President of Business Development for the newly formed Engineering and Aerospace Solutions (EAS) Group, and was responsible for leading Business Development activities. In July 2015 he was promoted to Chief Operating Officer for EAS, leading operational efforts across the United States providing Systems Engineering and full mission life cycle services to a variety of Federal agencies, including NASA, NOAA, the US Air Force, US Army and the US Navy.