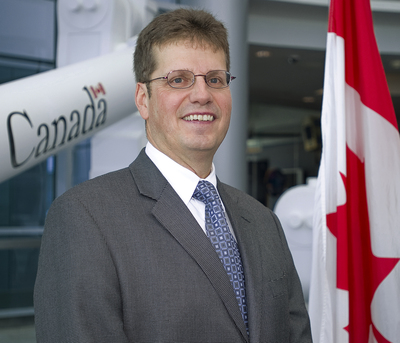 Pierre graduated from the Royal Military College in 1982 with a Bachelor’s degree in Mechanical Engineering and served 5 years with the Canadian Armed Forces. After leaving the military, Pierre worked in industry on large complex military and civil programs with a variety of companies for a period of ten years.

Pierre started working with the Canadian Space Agency (CSA) in 1998, first as Safety and Mission Assurance Manager and then as Logistics & Sustaining Engineering Manager on the International Space Station (ISS) where he was responsible for the Mobile Servicing System. Pierre then held the position of ISS Program Manager for Canada from January 2008 to July 2015.

After a one year assignment as Chief of Staff to the CSA President from September 2015 to July 2016, Pierre became the Director of Space Exploration Strategic Planning in July 2016 where he oversees planning activities for the Planetary Exploration, Space Astronomy and Human Spaceflight programs of the CSA.