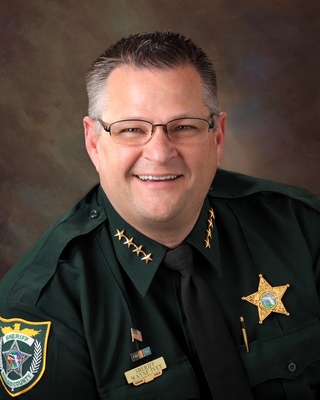 Sheriff Wayne Ivey has been a Law Enforcement Officer for over 38 years. He is a graduate of the FBI National Academy 237th Session and has a Bachelor's Degree from Daytona State College in Management and Supervision. His background in Law Enforcement is inclusive of Management, Criminal Investigations, Narcotics, Patrol Services, Public Integrity Investigations, and Corrections.

Sheriff Ivey is serving his second term as Sheriff of Brevard County and prior to being elected in 2012, served the citizens of the State of Florida as the Resident Agent-in-Charge for the Florida Department of Law Enforcement. As a member of the Florida Department of Law Enforcement, Sheriff Ivey developed numerous programs that were recognized at the national and state level for their innovation and excellence in criminal investigations. Programs such as the “Child Abduction Response Team” and “Law Enforcement Getting Identity Thieves” still stand today as national models in the investigation of child abductions and identity theft cases.

Sheriff Ivey has testified before the United States Congress on law enforcement related matters and has extensive experience in the area of crime prevention innovation. Under his direction, the Crime Rate in Brevard County has dropped almost 22% in the past five years and the Brevard County Sheriff's Office Crime Prevention Unit has been recognized as the Crime Prevention Unit of the Year for the State of Florida. Sheriff Ivey has also been recognized on two separate occasions as the recipient of the “President's Award for Crime Prevention and Awareness” by the Florida Crime Prevention Association and was recently honored to receive the NRA “National Defender of Freedom Award.”

Currently Sheriff Ivey is the Chairman of the Florida Sheriff’s Association Training Committee who speaks regularly on topics such as the 4 A’s of Survival (surviving an Active Shooter scenario), Identity Theft, Human Trafficking, Crime in America, Domestic Violence, Leadership, Becoming a “No Kill” Community, and Self Defense through Mental Preparedness. Sheriff Ivey firmly believes that “it takes a community to protect a community” and that crime prevention and education are vital to reducing our crime rate and protecting our citizens.