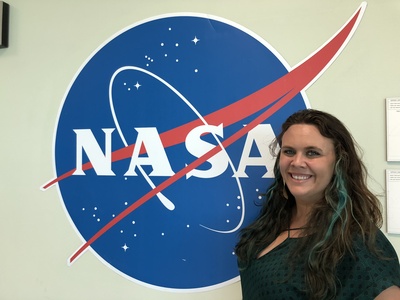 Barbara Kennedy is a Civil Engineer and Construction Manager at NASA’s John F. Kennedy Space Center. She’s been working at KSC through various internship programs since January of 2016. She graduated from the Florida Institute of Technology on December 12, 2018 and started full time in her current position February of 2019.

Prior to beginning her engineering journey, she was a horse trainer for over a decade. During that time she worked cow horses in Colorado, rodeo horses in Texas, trained endurance horses in California, led endurance style trekking adventures, trained horses for jumping and fox hunting in Ireland, and so much more! Barbara enrolled in the University of Texas at San Antonio in 2011 and started her Bachelors of Science in Civil Engineering. She had medical challenges, a death in the family, a lack of a formal mathematics background, and a co-op style internship program. This combination contributed to her 8 year completion time. It was eight hard but utterly rewarding years. She was president of The Society of Women Engineers at UTSA for two years, co-founder and VP of Women in STEM, attended half a dozen engineering conferences, gained a valuable network, and landed her career path here at KSC. Her first NASA internship was through the NIFS program. It was a traditional one term internship with no path forward to permanent employment. During this internship, she fell in love with America’s space program, NASA, and the Space Coast. In May of 2016 she was offered a position in the same office through the NASA Pathways Program. In August of 2016 she was presented with the 2016 John F. Kennedy Space Center NIFS Intern of the Year Award. Shortly afterward she and her grandmother bought a house, moved their pets and their lives out to the East Coast.

She aims to never become complacent in the incredible accomplishments of NASA and what it stands for. She hopes to inspire others through outreach, excitement, and passion; to remind us all to take on everyday challenges as opportunities to grow and flourish within ourselves, our communities, our nations, our world, and our universe.