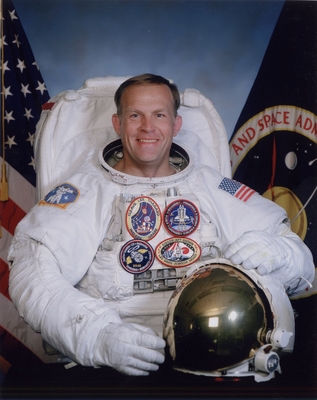 Mark Lee is currently the Director of Aerospace Facilities for Affiliated Engineers. Lee is married to the former Paula Marie Simon of Chicago, Illinois. They have three boys, Erik, Matthew, and Jonathon.

EXPERIENCE: Following pilot training at Laughlin Air Force Base, Texas, and F-4 upgrade at Luke Air Force Base, Arizona, Lee spent 2-1/2 years at Okinawa Air Base, Japan, flying F-4’s in the 25th Tactical Fighter Squadron. Following this assignment, he began his studies at MIT in 1979 specializing in graphite/epoxy advanced composite materials. After graduation in 1980, he was assigned to Hanscom Air Force Base, Massachusetts, in the Airborne Warning and Control System (AWACS) Program Office, as the operational support manager. His responsibilities included resolving mechanical and material deficiencies which affected the mission readiness of the AWACS aircraft. In 1982 he returned to flying, upgrading in the F-16 and serving as executive officer for the 388th Tactical Fighter Wing Deputy Commander for Operations, and as flight commander in the 4th Tactical Fighter Squadron at Hill Air Force Base, Utah, until his selection as an astronaut candidate.

NASA EXPERIENCE: Lee was selected as an astronaut candidate by NASA in May 1984. In June 1985, he completed a one-year training and evaluation program, qualifying him for assignment as a mission specialist on future Space Shuttle flight crews. His technical responsibilities within the Astronaut Office have included extravehicular activity (EVA), the inertial upper stage (IUS), Spacelab and Space Station systems. Lee has also served as a spacecraft communicator (CAPCOM) in the Mission Control Center, as Lead ''Cape Crusader'' at the Kennedy Space Center, Chief of Astronaut Appearances, Chief of the Astronaut Office Mission Development Branch, Chief of the EVA Robotics Branch, and Chief of the EVA Branch. He also worked Space Station assembly issues for the Astronaut Office.