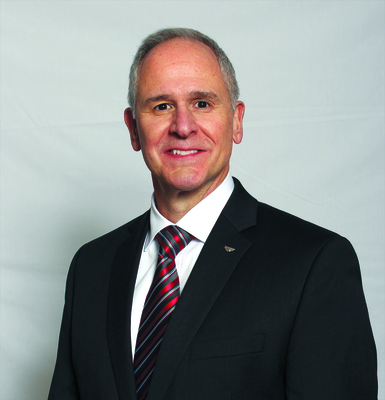 Captain Joe DePete serves as the eleventh president of the Air Line Pilots Association, International (ALPA), which represents more than 61,000 professional airline pilots in the United States and Canada and is the largest nongovernmental aviation safety organization in the world. He was elected at the union’s 47th Board of Directors meeting on Oct. 17, 2018, and began his four-year term on Jan. 1, 2019.

As president, Captain DePete serves as ALPA’s chief executive and administrative officer. He oversees the Association’s daily operations and presides over meetings of ALPA’s governing bodies, which set policy for the organization. He is also the chief spokesman for the union, advancing airline pilots’ views before the U.S. Congress, Canadian Parliament, government agencies, airline and other business executives, and the news media.

Captain DePete’s long history of service to the Association also includes time as ALPA executive vice president, FedEx Express Master Executive Council chairman, and Local Executive Council chairman. He was an active member of the ALPA Organizing Committee for the merger with the Flying Tiger Line Pilots Association as well as for the merger with the FedEx Pilots Association. Captain DePete was the sole representative for U.S. airline labor at the 1995 Asian Pacific Economic Council Transportation Ministerial Meeting held at the U.S. State Department.

Additionally, Captain DePete organized the first Pilots for Kids charity drive for the FedEx Express pilots and participated in the development of the first FedEx Pilot Habitat for Humanity project for the Anchorage, Alaska, council.

Based in Memphis, Tenn., Captain DePete flew and served as a line check airman on the A310/300 for FedEx Express. A graduate of St. John’s University, he earned a BA in political science and served as a captain in the U.S. Marine Corps, where he flew the KC-130 for Squadron VMGR-252, stationed at Cherry Point, N.C. He is also a certified investment portfolio manager, having passed the Series 65 (NASAA) Uniform Investment Adviser Law Exam. He resides in Louisville, Ky.