Ken Hodgkins, Director for the Office of Space and Advanced Technology in the Bureau of Oceans, Environment and ScienceFollow 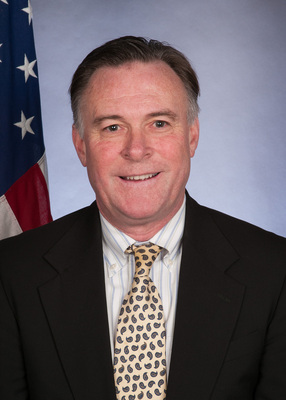 Ken Hodgkins has been with the Department of State since 1987 and presently is the Director for the Office of Space and Advanced Technology in the Bureau of Oceans, Environment and Science. The office is responsible for bilateral and multilateral cooperation in civil and commercial space and high technology activities, including the International Space Station, collaboration in global navigation satellite systems, the International Thermonuclear Experimental Reactor (ITER), and nanotechnology, and represents the Department in national space policy review and development. Mr. Hodgkins serves as the U.S. Representative to the UN Committee on the Peaceful Uses of Outer Space (COPUOS). He has been the State representative for major Presidential policy reviews on remote sensing, the Global Positioning Satellite (GPS) system, orbital debris, and the use of space nuclear power sources in space. Before coming to the State Department, he was the Director for International Affairs at the National Environmental Satellite Data and Information Service (NESDIS) of the Department of Commerce.

In 2010 he was the first Department of State recipient of the American Institute of Aeronautics and Astronautics’ International Cooperation Award and was named by GPS World as a “GNSS Leader to Watch in 2009-2010.”

Mr. Hodgkins holds a BA in Political Science (1978) and an MPA (1980) from the University of Maine at Orono. He joined the Federal government in 1980 as a Presidential Management Fellow.