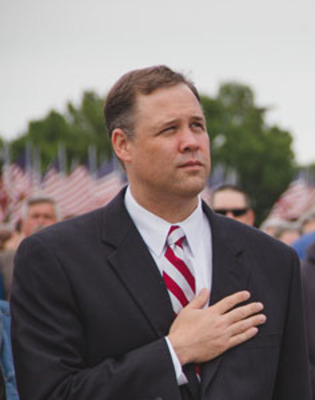 Congressman Jim Bridenstine was elected in 2012 to represent Oklahoma’s First Congressional District. He serves on the House Armed Services Committee and the Science, Space and Technology Committee, where he was selected to serve as Chairman of the House Environment Subcommittee.

Bridenstine began his Naval aviation career flying the E-2C Hawkeye off the USS Abraham Lincoln aircraft carrier. It was there that he flew combat missions in Iraq and Afghanistan and gathered most of his 1,900 flight hours and 333 carrierarrested landings. While on active duty, he transitioned to the F-18 Hornet and flew at the Naval Strike and Air Warfare Center, the parent command to TOPGUN.

After leaving active duty, Bridenstine returned to Tulsa to be the Executive Director of the Tulsa Air and Space Museum & Planetarium. Bridenstine’s background includes a triple major at Rice University, a MBA from Cornell University, 9 years active duty in the United States Navy, and business experience in real estate, ranching, aerospace, and defense contracting.

Bridenstine was promoted to the rank of Lieutenant Commander in the U.S. Navy Reserve in 2010 flying missions in Central and South America in support of America’s war on drugs and most recently transitioned to the 137th Air Refueling Wing of the Oklahoma Air National Guard, where he will fly with an MC-12 squadron stationed at Will Rogers World Airport in Oklahoma City.