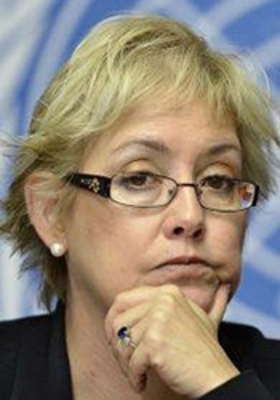 Theresa Hitchens is a Senior Research Associate at CISSM, where she focuses on space security, cyber security, and governance issues surrounding disruptive technologies. Prior to joining CISSM, Hitchens was the director of the United Nations Institute for Disarmament Research (UNIDIR) in Geneva from 2009 through 2014. Among her activities and accomplishments at UNIDIR, Hitchens served as a consultant to the U.N. Group of Governmental Experts on Transparency and Confidence Building Measures in Outer Space Activities, provided expert advice to the Conference on Disarmament regarding the prevention of an arms race in outer space (PAROS), and launched UNIDIR's annual conference on cyber security.

From 2001 to 2008, Hitchens worked at the Center for Defense Information, where she served as Director, and headed the center’s Space Security Project, setting the strategic direction of the center and conducting research on space policy and other international security issues. She was also previously Research Director of the Washington affiliate of the British American Security Information Council (BASIC), where she managed the organization’s program of research and advocacy in nuclear and conventional arms control, European security and North Atlantic Treaty Organization (NATO) affairs.

Hitchens's latest publications include, “Space Security-Relevant International Organizations: UN, ITU, ISO,” 2014, which was penned for the Handbook of Space Security; “Preserving Freedom of Action in Space: Realizing the Potential and Limits of U.S. Spacepower,” 2011, which was coauthored with Michael Krepon and Michael Katz-Hyman; and “Saving Space: Threat Proliferation and Mitigation,” 2009. Hitchens holds a Bachelor of Science in journalism from Ohio University in Athens, Ohio.