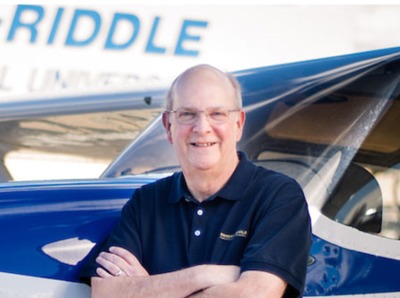 Colonel Frank Ayers (Ret) served in the United States Air Force for 26 years, serving as a B-52 instructor pilot, B-52 Squadron Commander, Commander Camp Phillips, Guantanamo Bay Cuba, Combat Support Group Commander and Chief of Joint Military Education Policy at the Pentagon. He is a proud 1974 graduate of the Virginia Tech, Corps of Cadets (VTCC) and Air Force ROTC. He is an active pilot and has logged more than 6,300 flight hours in a wide variety of aircraft types. He retired from the United States Air Force in July of 2000 and joined the Embry Riddle faculty later that same month.

Frank, his wife Debbie (also a former Air Force officer), and their family moved 14 times during his 26 years of active duty. So, home was where the Air Force sent them. Highlights include two tours at Castle Air Force base California, first an instructor and then commander of the Air Force’s B-52 Combat Crew Training Squadron. A seven-month deployment to Guantanamo Bay Cuba as a Camp Commander during the Cuban, Haitian Boatlift of 1995/1996, and more than eleven years (or winters!!) serving in B-52 units in North Dakota, the Upper Peninsula of Michigan, and upstate New York. The Air Force places much value in higher education and while on active duty he earned a master’s degree from Embry Riddle Worldwide (then known as the “Extended Campus” ), and attended the US Army War College., and the Harvard University, Senior Leaders in Government course.

Today, Dr Ayers is a Professor of Aeronautical Science at the Daytona Beach, Florida Campus and teaches undergraduates, masters, and PhD students. From September 2009 to June 2019, he was privileged to serve as the 7th Chancellor and Chief Executive Officer of the Prescott Arizona Campus, of Embry -Riddle Aeronautical University. From 2005 to 2009 he served as Chairman of the Flight Training Department at the University's Daytona Beach, Florida Campus. With assistance from Embry Riddle, Frank earned an Airline Transport Pilot certificate, with type ratings in the Boeing 757 and 767 at Northwest Airlines. And he earned his Certified Flight Instructor certificate in 2001 from Embry Riddle.

In the military, leadership responsibility comes at a very young age and the Air Force expected that would take care of the people who work for you as though they were a part of your family. The Ayers family believes that the best part of our 26 years in the Air Force, and now over 20 years at Embry Riddle, has been the opportunity to serve, and serve with, so many wonderful and talented people. Trading our Air Force family for the Embry Riddle family has made all the difference!