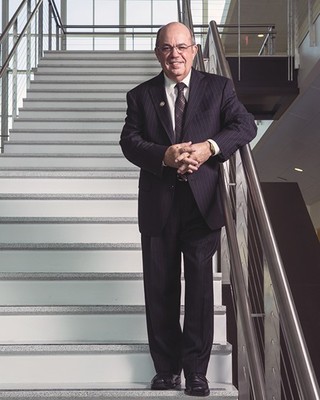 Dr. John Johnson assumed the presidency of Embry-Riddle in 2006 after serving as interim president and provost. Under his leadership, the university has made historic progress in developing campus facilities, strengthening the financial base, and expanding its academic degree programs, research activity, and global outreach.

As the university’s fifth president, Dr. Johnson and the university made aviation history with the launch of the world’s first Commercial Space Operations degree program and the world’s first Ph.D. program in Aviation. Additional Ph.D. programs have been established in Engineering Physics, Aerospace Engineering, Mechanical Engineering, and Human Factors. At the undergraduate and master’s degree levels, he has presided over the addition of 30 new degree programs, broadening and deepening Embry-Riddle’s academic offerings to meet the ever-changing needs of the aerospace industry.

Dr. Johnson’s leadership has resulted in significant advancements in the university’s research efforts over a wide range of key areas, including robotics and unmanned aerial vehicles, propulsion, advanced air traffic control systems, aircraft design, upper atmospheric research, green technology, human factors psychology, transportation systems, and aviation management. Under his guidance, the university was elected to full membership in the Association of Independent Technological Universities and the Oak Ridge Associated Universities consortium of the top 100 research universities in the United States.

In 2008, under Dr. Johnson’s stewardship of the research program, Embry-Riddle was awarded the prestigious Collier Trophy for the testing and development of automatic dependent surveillance and broadcast (ADS-B) technology. Working with the FAA and industry leaders like Lockheed Martin and Boeing, Dr. Johnson has positioned the university as one of the nation’s leaders in the development of next-generation air traffic management technology.

President Johnson has forged strong ties with aviation industry leaders in the United States and abroad. Working with the administration and faculty of the Worldwide Campus, Dr. Johnson’s efforts have resulted in an expansion of commuter campuses in 150 locations globally, including the newest campuses opened in Europe, the Middle East, and Asia. In addition, through the establishment of the Center for Aviation & Aerospace Leadership, the university has made a commitment to developing future leaders for the aviation and aerospace industry. Dr. Johnson has worked with the leadership of the university’s three primary campuses to establish and expand the use of distance-learning technology, including intercampus curricular sharing.

Dr. Johnson has received many awards and honors for his leadership in aerospace education and research. In 2007, he received the Jimmy Doolittle Fellowship Award from the U.S. Air Force Association, and in 2008-2009 he served as the honorary national chairman of the Silver Wings Society. He was also a 2010 recipient of the John K. Lauber Aviation Safety Award presented by the University Aviation Association. In 2012, Women in Aviation International presented Dr. Johnson with an Achievement Award for creating the Women’s Ambassador Program at Embry-Riddle. Dr. Johnson is a member of a number of professional societies and has given position papers on the future of aerospace education and national defense.

During his tenure, the university’s academic reputation has grown significantly. U.S. News & World Report has rated Embry-Riddle’s undergraduate Aerospace Engineering program No. 1 in the nation for 14 consecutive years. The College of Aviation is universally considered the best in the world. Six Engineering Physics faculty members have received National Science Foundation Career Awards for outstanding research productivity.

Dr. Johnson has been recognized for his contributions to economic development and community outreach, including serving as the chairman of the board of Halifax Health Medical Center. In 2013, President Johnson was appointed to the Aerospace Alliance representing the state of Florida by the governor. In 2012 the Volusia and Flagler Counties’ Association for Responsible Development awarded Dr. Johnson their Citizen of the Year award. In that same year Dr. Johnson received the key to the city of Daytona Beach, presented by Mayor Glenn Ritchey. In 2013, for his efforts to position Embry-Riddle as an economic engine for the state, Dr. Johnson received the Gold Medallion Award for Economic Development from Florida Gov. Rick Scott. In addition, President Johnson was the recipient of the United Way’s Herbert M. Davidson Award for Outstanding Community Service.

President Johnson served as provost at Texas A&M University-Texarkana before joining Embry-Riddle. He served as a college dean for 13 years at the Medical University of South Carolina and at Northern Kentucky University. He also held faculty appointments at Lamar University and Bowling Green State University.

On a personal level, John is married to native Texan Maurie Rodgers. A second marriage for both, they have seven grown children and nine grandchildren, residing in California, Texas, South Carolina, and Florida. John grew up as the son of a career Army officer and lived abroad extensively. He enjoys playing golf, boating, traveling, flying, and giving back to his community by serving on a number of boards and participating in civic organizations.