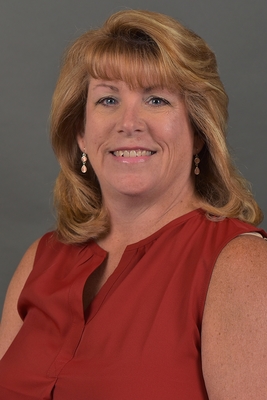 Gail Rouscher’s career in aviation began in the U.S. Navy as an Aviation Machinists Mate stationed in Rota, Spain where she supported the squadrons by maintaining the powerplants for the TF30, T34, and F404 engines. She was transferred to Naval Air Facility (NAF) Detroit and attached to AIMD where she supported the VP-93 squadron and performed maintenance on the T-56 engine, APU, and propeller for the P-3 Orion, and became test-cell qualified for the T-56 engine. She earned her A&P certificate, then worked for Duncan Aviation performing composite and sheet-metal repairs and modifications to corporate aircraft. During her time with the avionics department, she was heavily involved with the testing and modification of aircraft during the Reduced Vertical Separation Minimums (RVSM) initiative.

Gail Rouscher earned a Ph.D. in Educational Leadership Higher Education at Western Michigan University, a Master’s Degree in Organizational Management and a Bachelor of Arts Degree in Management and Organizational Development from Spring Arbor University, Dr. Rouscher is a U. S. Naval Veteran and holds an A & P certificate. Dr. Rouscher has more than 25 years of aviation maintenance training and experience encompassing military, cargo, and corporate aircraft. Dr. Rouscher has been a member of the faculty for Western Michigan Universities College of Aviation since 2008 and is an adjunct professor for Kellogg Community College. Dr. Rouscher teaches in the Part 147 program with a focus on aviation structures and composites in addition to teaching courses for all majors in the college. Research has focused on marginalized students with a strong focus on military and veterans.