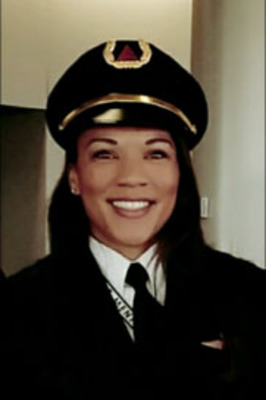 First Officer Dawn Cook has always had a love of flying. She was introduced to the world of aviation by her mother, who was a flight attendant (USAirways) for over twenty five years. She began her flying career at Embry-Riddle Aeronautical University (Daytona Beach campus). While completing her Bachelor’s Degree, she obtained all of her ratings, up to an including her CFII/MEI. After completing her college degree, she instructed in both Part 61 and Part 141 schools for several years. In 2004, she transitioned to the world of flying freight and obtained multi-engine experience on Barons and Cessnas at AirNet Systems. As the aviation industry slowly began to recover from ‘9/11’, the Regional Airlines initiated hiring and Dawn started flying jets at PSA Airlines. This opportunity kept her mostly on the East Coast, however, she was fortunate to acquire jet time in the CRJ 200/700/900 models. Never being one to simply ‘stand by’ and wait for life to happen, Dawn discovered that Spirit Airlines was hiring in 2005. In order to set herself apart from her peers, she applied and was hired to fly the Airbus 319/321. The flying at Spirit gave Dawn the prospect to fly to the West Coast and, for the first time, to the Caribbean. In 2007 Delta Air Lines opened its hiring window for a few small classes. Again, Dawn took the opportunity to advance her career. She was hired in October of 2007 onto the MD-88 (more specifically, the Delta Shuttle) based in New York. Dawn spent some time on the MD-88, then switched to the Boeing 737, which she flew for several years. In 2016, she made one more move to the A320, however, this time not only as a First Officer, but also as an instructor.

Dawn has recently accepted the role as the Manager-Pilot Outreach, a new division with Delta Air Lines. She will continue to fly, however, her focus will be to cultivate this new entity and solidify its purpose and viability for years to come. Her experience as a Seniority Line Instructor (SLI), company Ambassador and Regional Lead Mentor (Atlanta Lead Mentor for Delta’s New Hire Pilot Mentor Program) has significantly prepared her for this new position. The new division will encompass internal company support, community engagement and collegiate pipelines; all in efforts to sustain elite aviator prospects for Delta Air Lines.