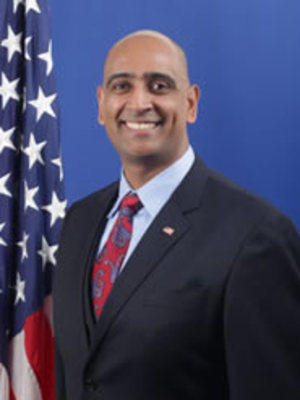 Dr. Chaudhary previously served as Executive Director, Regions and Center Operations, at the FAA. In this role he was responsible for leadership, integration, and execution of aviation operations in 9 different regions located nationwide. He executed a $254 Million operating budget, and led over 400 Federal Employees geographically located across the nation. As second in command to the Deputy Assistant Administrator, he was responsible for providing Department of Transportation and FAA-wide services in the areas of operations, safety, policy, industry and congressional outreach, and emergency readiness for the National Aerospace System.

Ravi Chaudhary is a former Air Force officer, having completed 21 years of service. He has completed a variety of command, operational, engineering, and senior staff assignments in the Air Force. As a C-17 pilot, he conducted and led global flight operations in Europe, Asia, Africa, the Caribbean, and the Pacific regions. As a flight test engineer, he was responsible for FAA Technical Standard Order (TSO) certification of military avionics and hardware for over $2 Billion in Air Force Transport Modernization Programs. Dr. Chaudhary also supported space launch operations for the Global Positioning System (GPS), and led third stage activities to ensure full-operational capability of the first GPS constellation. As a systems engineer, he supported NASA's International Space Station test activities, to include development of the first orbital debris repair systems applicable for use by NASA Astronauts. Ravi has also served at the Pentagon as a Speechwriter and Strategic Planner in the Secretary of the Air Force Executive Action Group and Deputy Chief of Staff for Air Force Strategic Plans and Programs. Dr. Chaudhary also serves as a member of the President's Advisory Commission on Asian Americans and Pacific Islanders. In this role, he advises the President on executive branch efforts to improve economic and community development, public and private sector collaboration, health, education and veterans support for the AAPI community.

Dr. Chaudhary holds a Doctorate in Executive Leadership and Innovation from Georgetown University, an M.S. in Industrial Engineering from St. Mary's University as a NASA graduate fellow, an M.A. in Operational Arts and Military Science from Air University, and a B.S. in Aeronautical Engineering from the Air Force Academy. He has published numerous articles in Future Strategy, Aircraft Design, Business Transformation, and Space Operations. Dr. Chaudhary holds FAA commercial, multi-engine, and instrument pilot certificates and has logged over 3000 hours as a pilot and flight test engineer (760 combat hours) and multiple deployments since Sept 11, 2001.